5 Indoor Pest Control Products and How to Use Them

You’d think tackling bugs with pest control products would be a task reserved for outdoor gardens where bugs fly free, but those sneaky little guys are pretty good at finding their way inside and setting up camp in your beloved houseplant collection. To make sure your succulents and other potted beauties don’t get munched on by hungry bugs, you’ll want to use pesticides that are safe for indoor use—but how do you decide which formula to buy?

We’ve broken down the basics of the five best pest killer products for indoor use, so you can get rid of those pesky bugs without exposing your family or pets to harsh chemicals that could make them sick. These formulas are safe, easy to use, and effective at keeping your plants healthy and bug-free.

Whether you’ve got a couple of creepy crawlies popping up now and again, or you’ve suddenly awoken to a whole family of tiny intruders, one of these products is certain to help you protect your plant and rid your home of unwanted, six-legged guests.

It turns out that good old soap n’ water is one of the best ways to get rid of many common plant pests, like aphids, mites, and whiteflies! You can buy premixed formulas, but it’s pretty simple to make your own DIY solution at home. To make insecticidal soap spray, you’ll just need an all-natural castile soap, some water, and a spray bottle. Mix 1–2 tablespoons of soap with 1 quart of water, shake it up in the bottle and spray it generously all over your plants.

Wait a day or two for the excess moisture to dry up, and then apply again. This should help to knock out the last few stragglers who made it through the first round. Luckily, this natural formula is super gentle on your plants, so it won’t affect them if you reapply it a few times. This also makes it an excellent preventative treatment to use every few months to stop the bug problem before it starts!

For those of you who swear by the incredible powers of essential oils, you’ll be blown away by the potency of neem oil! This insecticidal oil comes from the neem tree, and it disrupts the hormone systems of insects, so they’re unable to develop, lay eggs, or continue eating.

You have the option of buying it pure, or a slightly diluted solutions (usually at a concentration of around 70%) to make your own spray solution, or you can buy a product that’s already infused with neem oil. To make your own, mix 2 tablespoons with 1 quart of water, shake it up and spray all over the plant. Wait at least one week before reapplying, if necessary.

Its name may sound like a mysterious chemical, but don’t be fooled—pyrethrum is just an extract from the chrysanthemum flower! But despite its seemingly innocent origin, it’s perhaps the best pest control for indoor use because it instantly attacks their nervous system and freezes bugs in their tracks. Spray it all over your plants, and even the gnarliest spider mite infestation can be exterminated.

One thing that’s important to keep in mind with pyrethrum is that while it’s safe to use around your family and your furry pets, it’s toxic to other bugs, fish, and reptiles, so it isn’t recommended for outdoor use, nor should it be poured down the drain. Don’t spray pyrethrum on your houseplants if you intend on bringing them outdoors for a bit of sunshine, as you could end up harming helpful insects like butterflies, bees, and ladybugs.

For annoying buzzing insects like fungus gnats and whiteflies, sometimes the best way to get rid of them is by putting out a sticky trap. It’s a pretty straight forward process—you place the trap where the bugs are, and the sticky surface stops them in their tracks. Throw out the trap once it’s coated in old bugs, and bada-bing bada-boom, problem solved!

Of course, this will only trap live bugs and won’t get rid of any eggs or larvae that aren’t very mobile yet. If you’ve got a more severe bug problem, you might want to use a sticky trap in addition to some soap spray or neem oil to deal with the issue as quickly and effectively as possible.

This product definitely takes first prize for the coolest insect control formula! It’s made of ancient fossilized diatoms ground up into a fine powder. It’s different from most other insecticide products because you mix it directly in with your potting soil, and it has plenty of other benefits too. On top of dealing with the bug issue, it improves drainage and prevents mold, which helps protect your houseplants’ roots if you accidentally overwater.

Diatomaceous earth won’t kill bugs instantly—rather, it dehydrates them, so they’ll be gone in a few days. While it feels powdery to us, it’s actually quite sharp at the microscopic level, so fragile insect larvae won’t stand a chance if it’s mixed into the soil where their eggs were laid. It’s great for dealing with fungus gnats, whiteflies, and other insects that lay their eggs in the soil, but for insects like spider mites who lay their eggs on the undersides of leaves, you’re better off using an insecticidal spray.

An ounce of prevention is worth a pound of cure, so it’s always a good idea to make an effort to stop pest problems before they even start! Here are some best practices for making your houseplants less hospitable for insect invaders: 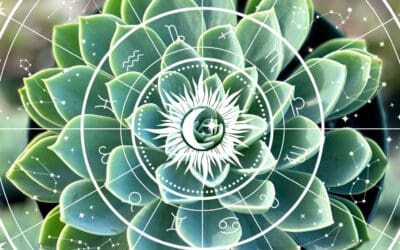 As each new year rolls around and the stars make their way through the sky, many of us find ourselves checking our... 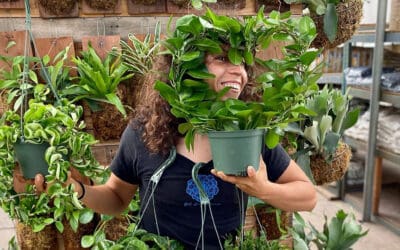 The Best Gifts Come from the Greenhouse

Finding the perfect holiday gift for a friend or loved one can be challenging. Figuring out someone’s... 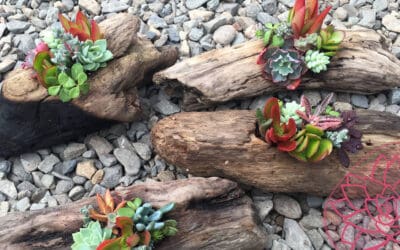 How to Integrate Plants and Succulents Into Your Fall Decor

The season of decorating is upon us, and we love how versatile succulents are for fall decor! You can find the classic...